In my opinion, this is just as challenging as fly fishing for game fish.. I really respect the canniness and speed of these carp.
Anyone who says that I am not using traditional flies and therefore it is not proper fly fishing should take note: I have watched these fish taking leaves, flies, feathers etc, so the bogbrush is not so out of place.
The point is with carp is that they are very cautious and taste things before they decide to eat. I hook about 1 in 8 takes and I reckon I am reasonably quick! 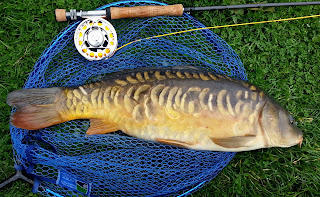 I am beginning to enjoy this too much.
So cheap to do: Shakey #7 Caimore reel, Mullarkey mill end, plus backing, some nylon and a bog brush! ( the rod, a discontinued Odyssey, Brilliant rod!!!!) 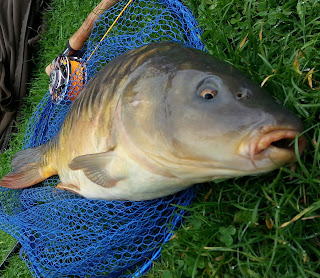 Total cost: £60
That's the cost of two visits to some 'trout lakes'!
And the fish we catch are wild!
Posted by The Lion Tamer at 13:14 No comments:

boring if you don't like carp
Posted by The Lion Tamer at 14:15 No comments:

Worth a look
Posted by The Lion Tamer at 00:21 No comments:

Fishing has been great!

Bone (Steptoe) had a nice Brown out of Blithfield 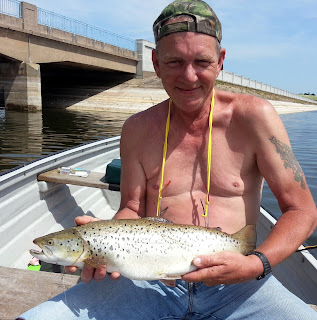 I had over 100lb of carp plus the odd barbel on my first go on the 'pellet waggler', the crudest form of fishing I have ever done but thoroughly enjoyable! 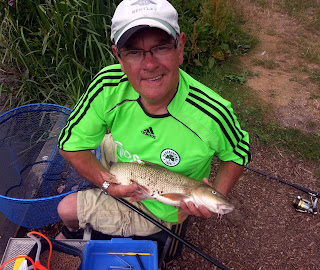 Please note the careful choice of camo. Stealth is so important on a commercial fishery
And a nice carp on the fly 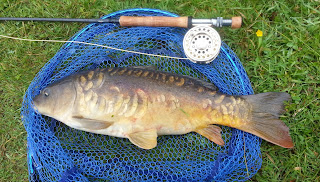 Also had a couple of excellent days up Wolfscote on the Mayfly!!! No pics same as last year! 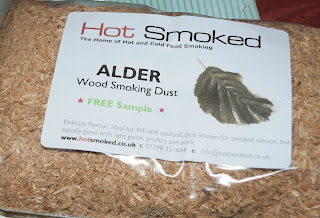 This is about hot smoking with a  fladen model.

As  they come with no instructions, I thought I would do the  following...
Take some trout, caught by fellow Tamer : Jon. Yes, I blanked today but Jon caught when no one else did. Was pretty good angling. 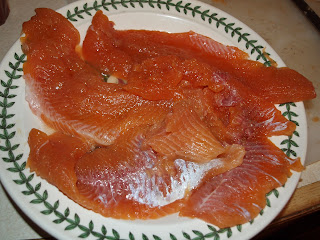 First fillet the trout,  I watched a couple of you tube vids. I'll get there! 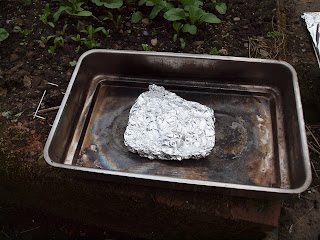 Put some wood shavings in  some foil and stab 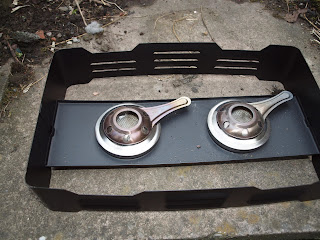 Put some meths in 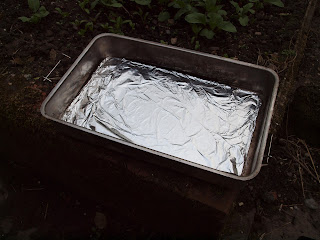 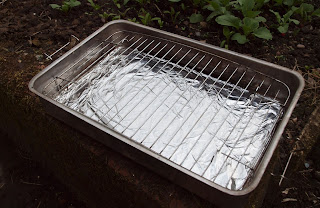 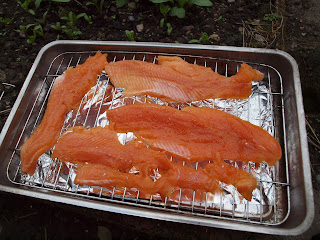 Load the fish Put the lid on an wait until the burners are finished. 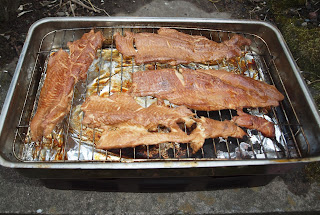 Just a diary insert really.
Had some good days on Blithfield but two treasured days on The Dove at Wolfscote.
Mayfly has been brilliant once again. Where do these fish hide during the rest of the year? Had them competing for my fly and chasing my fly when bounced along the surface. Manic! Bottom of the river coming up. I reckon it is the nymphs loosening it.
Posted by The Lion Tamer at 14:53 2 comments:

Happy and Sad.
I have not posted for a while. Well I have not had chance to fish with my great mates until recently.
The weather has been terrible. We have had three outings; all on Blithfield.
Although we did not fail to catch on our first two visits, I have to say the cold conditions did defeat us. We did not stay as long as we would have. Leaking waders did not help and I felt the pain of being really cold.
The third visit last week is filled with mixed emotion.
Sunday 07/04/13
Steve Parton RIP.
When I heard  the news I was terribly saddened. I used to visit him regularly at his unit in Long Eaton.
He helped me so much in the few years I knew him. From the off he made it clear that I either listen or bugger off. He did not suffer fools. So listen I did.
He made me 4 fine rods.
He sold me lots of super fly tying stuff at prices that I knew were well below what he normally sold them.
He'd make me a cup of tea, play the gob iron while sitting at his PC in only his boxer shorts and shirt.
His floor was his ash tray.
How this place never went up in smoke (quickly) is a mystery!
We had interesting chats about all sorts of things. As I progressed to being more interested in river fishing, the more we chatted even though  his heart was on the reservoirs. There was always something we chatted about and we put the world to rights on several occassions.
I can always remember his views on the sad demise of British manufacturing and if you use crap Chinese hooks you deserve what you get.
He always asked with genuine interest to what I was going to do with the materials he sold to me.
He rang me a few times with offers of prototype rods, and no, he didn't 'see me coming' as £14 for a test rod ain't bad is it?
I know many folk never got on with him and indeed, I can understand why. But we just hit it off. I feel he felt sort of sorry for me, having no previous knowledge but because I listened and showed a bit of respect to an obvious expert in his field, he accepted me. I will miss him.

So after the bad news, The Tamers decided to have another day on Blithfield.
10/04/13
Bone, Jon and me.
Well they were not on buzzers even though it was warmer. Two fish in total off the bank in flat calm conditions in two hours. Not good for The Tamers.
I had a coffee and watched a bloke having some success on a lure. But what lure?
Stuff it! Out of respect? Or because his death was on my mind? I found an outragous orange lure that I had tied a couple of years ago from a pattern out of Steve Parton's book.
The fish were suicidal.
I had five in 30 minutes. Then take after take with no hook ups in the next 30 minutes. I checked my lure... No hook!
Cheap Chinese hook? I don't know.
I only had one of the orange ones so  tied on something else. I had a few more but nothing like the action with the broken fly.
Maybe Steve was laughing!

I have since tied many more of the simple orange fly that did the damage. I have used a quality hook. 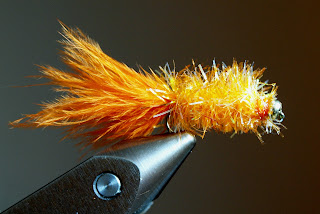 The Tamers do it camo style 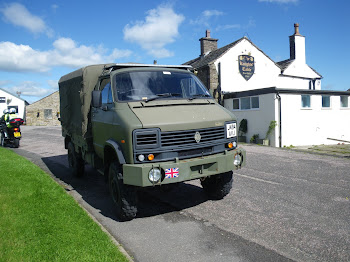 Wild rainbow from the Derbyshire Wye 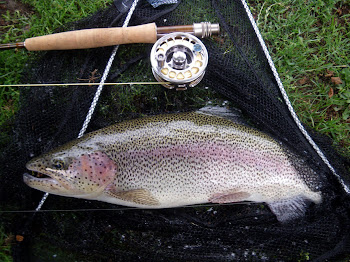 Top whisky from The wine shop in Leek 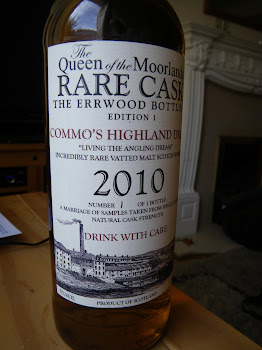 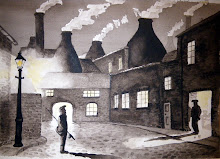 Painted by The Lion Tamer, influenced by Sid Kirkham

View my complete profile
Welome to my blog. I am now in my fourth year of fly fishing having joined SOTAS, HAS and DCAC (Monty Python springs to mind)! We'll see how I get on especially days with fellow 'Tamers', 'Bone' and 'Jon. More members announced soon! You will easily recognise me as I am the one who looks as if I have been taught to cast in a circus ring. Any how. I met a guy in the pub a couple of years ago who has since become my fishing buddy and we decided to give it a go. Jon joined us a couple of years ago and we have had a great time. We have met some super people. I suppose we should have invested in lessons but our self taught 'lion tamer' casting style has caught us a few stockies over the past couple of years. We will only go to the stillwaters from now on when our legs ache. Have to say my Blog is not all about fishing as it is not a forum, just a place where I can say what I think and share my experiences should anyone be interested. This season we will be mostly doing all sorts of fishing. Isn't fishing BRILLIANT.